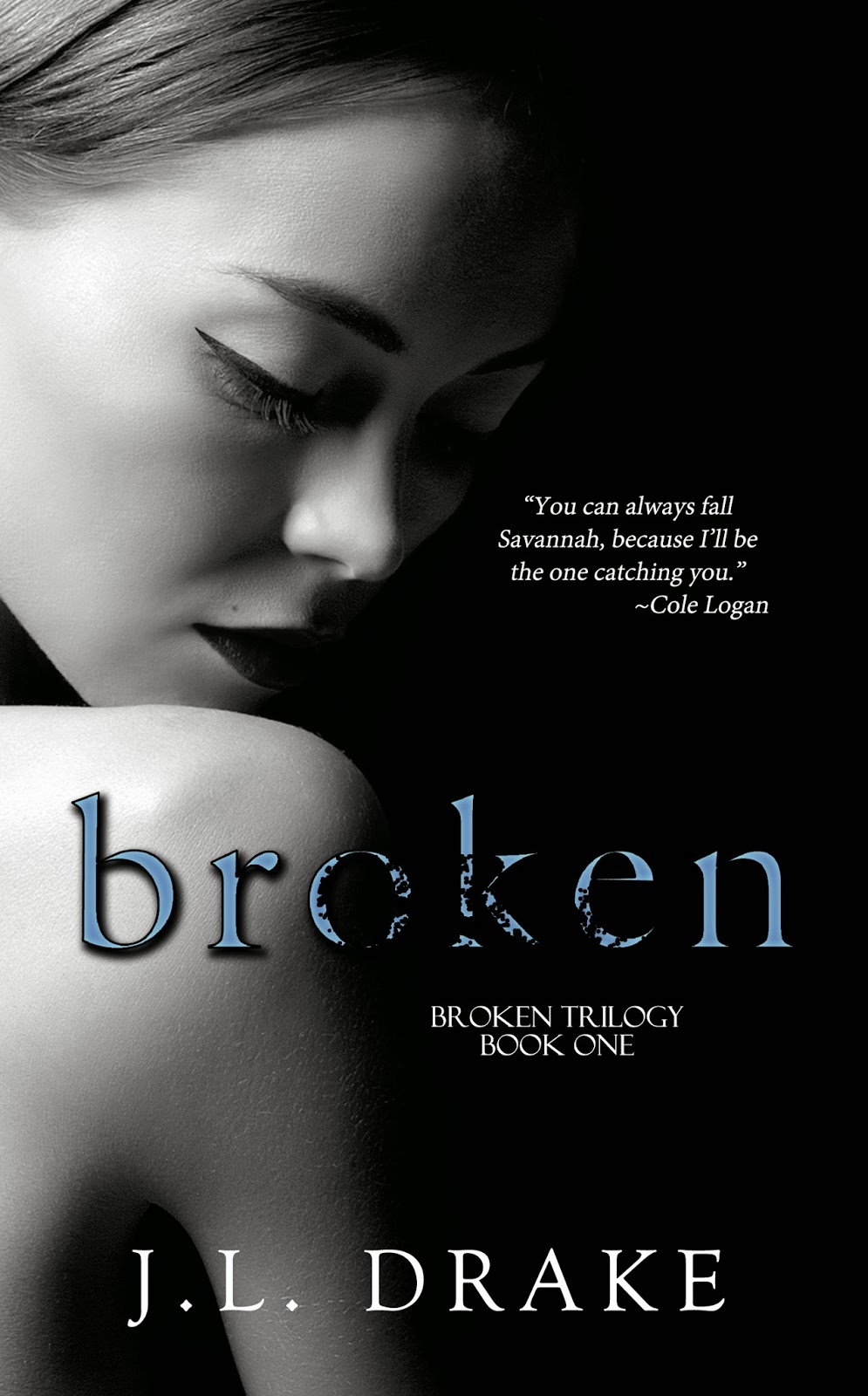 Title: Broken
Series: Broken Trilogy (Book #1)
Author: J.L. Drake
Genre: Romance/Suspense
Publisher: Limitless Publishing
Release Date: March 3, 2015
Blurb
My name is Savannah Miller.
My father is the mayor of New York. One day after my twenty-seventh birthday I was grabbed from behind. A cloth sack was quickly pulled over my head, and I was taken from everything I’d ever known.
I was beaten, starved, treated like an animal, and forced to live in a room with no windows. With no sense of time and no dignity left I finally gave up hope and made a promise to myself to end it all.
Unfortunately, it was going to be a slow process.
Then one night an elite group of US Army soldiers came to my rescue. I was brought to a safe house and given two options:
One- Stay under their protection and follow their rules or…
Two- Leave and be guaranteed to be returned to the savages within a week.
I chose option one.
As I work with a therapist and begin processing my hellish ordeal things slowly begin to surface. With the help of new friends and a potential new love I fight to get my life back and make choices that will forever alter my future.
This is my story… 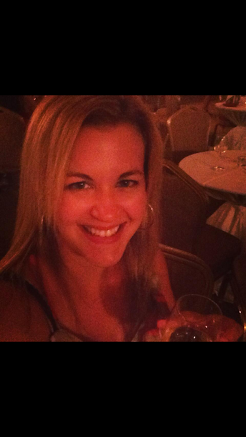 J. L. Drake was born and raised in Nova Scotia, Canada, later
moving to Southern California where she lives with her husband and two
children.
She’s a huge book lover but never thought of writing until roughly
a year and half ago. Now she loves it and has six books in the works.
What Lurks in the Dark is
her first novel released in June 2014.
Author Links
Facebook ~ Goodreads ~ Twitter ~ Amazon Author Page
Instagram
@j.l.drake Does the sight of a cop’s badge—or his handcuffs—make your pulse race? Do you drive by your local firehouse just to catch a glimpse of your favorite fireman? Ever peek in the cockpit just to check out the captain?

If you agree the only thing sexier than a man in uniform is a man out of uniform, you’ve come to the right place. We’ve handpicked an assortment of sizzling hot, uniformed heroes to satisfy your uniform fetish.

What’s a girl to do when her elderly neighbor’s beloved Miss Pitty Pat seems injured and stranded on the ledge outside in the middle of the night? Rescue her, of course. Never mind the small matter of being afraid of heights, and ending up stranded on that ledge in nothing but a sexy negligée.

Firefighter Rhys can’t quite believe his eyes when he sees the hot as hell school teacher from across the road seemingly stuck on a ledge. There’s only one thing to do. Get his little Cat off that ledge and finally make her his.

After all, she is now at this Dom’s mercy, and it’s only proper to spank that luscious ass for scaring him half to death.

Cat’s rescues have never been such fun.

I vividly recall when the call for this Anthology went up. There was much excitement in the Evernight Author room. I was busy writing something else, and didn’t give it much thought, other than I’ll write something if the idea comes to me.

Famous last words, as ever. You see, my muse can never resist an Anthology call, let alone one as yummy as this. I pretty much knew that I would have to write a firefighter. It had been a while since I wrote one, but I do have a fondness for them.

Using his thumbs he spread her puffy folds wider, and a shudder went through his girl. From this position he could admire the way her pussy hole quivered and clenched, begging him without words. More of her juices glistened in the moonlight. With no clouds in the sky the full moon was a brilliant orb in the night sky, and with his curtains open his bedroom was illuminated perfectly for his needs. Of course it would afford any of Cat’s neighbors who happened to look across the street a perfect view of their activities, but that just added to the whole sensuality of it all. Rhys loved showing his subs off. No one ever got to touch his play partner, and he would deck anyone who would try that with his Cat in particular, but he did like to be watched.

Rhys licked along her sensitive skin, taking care to avoid her clit. He wanted her to come around his cock. The little bundle of nerves stood proud and erect, just begging for his touch, and he blew across it.

“Fuuuuck, please, Sir?” Cat’s muffled groan made the sadist in him strut and want to prolong this, but the ache in his own balls meant he couldn’t. He would lose his shit otherwise, and he wanted to come balls deep inside of his little cat with her milking his dick.

He bit the inside of her thigh, and Cat’s legs jerked. Grasping her hips to steady her, he lapped at her juices and feasted on the taste of her, as she lumbered toward release. Her little mewls and moans made his own release build in waves, and he withdrew from between her legs before she had a chance to come. Cat swore again, and Rhys laughed.

“Careful, there, little cat. Foul language like that will get you gagged, and you won’t be allowed to come at all.” Straightening he stepped back and drank in the beauty that was his Cat.

“If only you could see yourself, all trussed up and at my mercy. And you know anyone can see us. If your neighbors look out of their window they get a full view of your red ass and your greedy little wet cunt, all puffy and needy. You want my cock so badly, don’t you, little cat? Perhaps we should move this to the window so that they can properly see?”

Without waiting for her response Rhys steered her to the window by her hair, until her top half was flattened against the pane of glass, and she was kneeling on the window seat. He turned her head to gauge her reaction, and pride filled him at what he saw. Her flushed features spoke of her arousal, and her beautiful eyes had that glazed look he loved to see. Still he needed to be sure.

“Give me a color, little cat,” he said, and Cat moaned and licked her lips.

He spanked her ass cheek one last time, satisfied at the way her flesh wobbled and her mouth opened on a silent O.

“For that I’m going to fuck you so hard, girl.”

Glutton for punishment would be a good description for Doris… at least that’s what she hears on an almost daily basis when people find out that she has a brood of nine children, ranging from adult to toddler and lives happily in a far too small house, cluttered with children, pets, dust bunnies, and one very understanding and supportive husband. Domestic goddess she is not.

There is always something better to do after all, like working on the latest manuscript and trying not to scare the locals even more than usual by talking out loud to the voices in her head. Her characters tend to be pretty insistent to get their stories told, and you will find Doris burning the midnight oil on a regular basis. Only time to get any peace and quiet and besides, sleep is for wimps. Loss… a word Elizabeth Haddington knows only too well. Despite the tragedies she’s endured, she’s been able to rise from the adversity she’s faced and begin her life again. Being a self-assured and strong woman, she knows she doesn’t need anyone to make her whole.

Hate, pain, and twisted memories are all Sawyer Bryant’s ever known. He’d slowly lost who he was and what he should’ve become. His only escape was the military… Eight years later, as an ex-Navy SEAL, he’s forced to confront his father and their disturbed and violent past.

Then one day, his life is turned upside down, when he glimpses a woman singing in her car at a set of traffic lights. Thinking he’d never see her again, amazingly he finds her performing with her band at the local bar. This chance encounter brings these two lost souls together. Once Sawyer gets a taste of her melodic voice, there’s no turning back.

For Elizabeth, when she meets Sawyer… she realizes she’s fallen hard. But is this really love she’s feeling or does love build slowly over time?

What happens when fate turns things around on you, creates flashes you can’t turn from… moments that will shape your life?
They are faced with the choice of darkness surrounding them or to rid themselves of the guilt and pain and move toward the light.

This story is about life’s moments. How they can make you or break you, and one man’s hope that… Love, won’t judge him.

Amanda M Johnson is originally from Florida. She now lives in Utah where she is a Full-Time Nurse. She is, however, always first a mother and wife. She began to love reading at a very young age and toyed with the idea of writing ever since she can remember.
She loves all things romance!! Amanda is inspired by the indie romance community as a whole and embraces the title book whore with great pride!