Nina Hardwick has had a rough life since leaving high school, but inside she is still the girl looking for a silver lining. The past several years have left their toll on her psyche, and just as she feels like she’s climbing out of a deep abyss, her life and the lives of millions of others fall into shambles as a virus overtakes the country and leaves a plague of undead armies scouring the land.

In a desperate attempt to get away from the infected, Nina and some neighbors speed out of town, nearly killing a man on a motorcycle. When they stop to rescue him, Nina realizes that he is the one man from her past she never got over, the guy who should have been her high school sweetheart until she messed it up. But this unrequited love, Kevin Savage, says he doesn’t even remember her. Or does he?

Nina, Kevin, and her neighbors head to the wilderness and fight to survive not only the plague but also hunger, cold, their inner demons…and even each other. Will they survive and, more importantly, will her heart?

All those thoughts were in my head, whether buried or at the forefront, as the tears began to stream down my cheeks. I hardly registered when Kevin pulled me into his chest and held me tightly as I sobbed, letting it all go.

Once my crying jag was over, I marveled at the man holding me. It wasn’t too long ago that he had said he never knew what to do when someone was crying. So I swiped at my face and nose with my hand, realizing his coat had absorbed a lot of the teary evidence, and looked up at him. “You did just fine,” I said.

He started laughing. “So did you.”

Then I laughed hard. Between that and the tears, I was beginning to feel like a whole new woman. “No, I didn’t mean this,” I said, waving my hand toward my back, indicating the fully dead bodies in the snow behind me. My voice was softer when I said, “With me crying. You said you never knew what to do when someone started crying.”

“Oh.” Kevin was a quiet man, speaking less now than he had when he was younger, but I believed I had rendered him mute.

“What you did right there was perfect.” 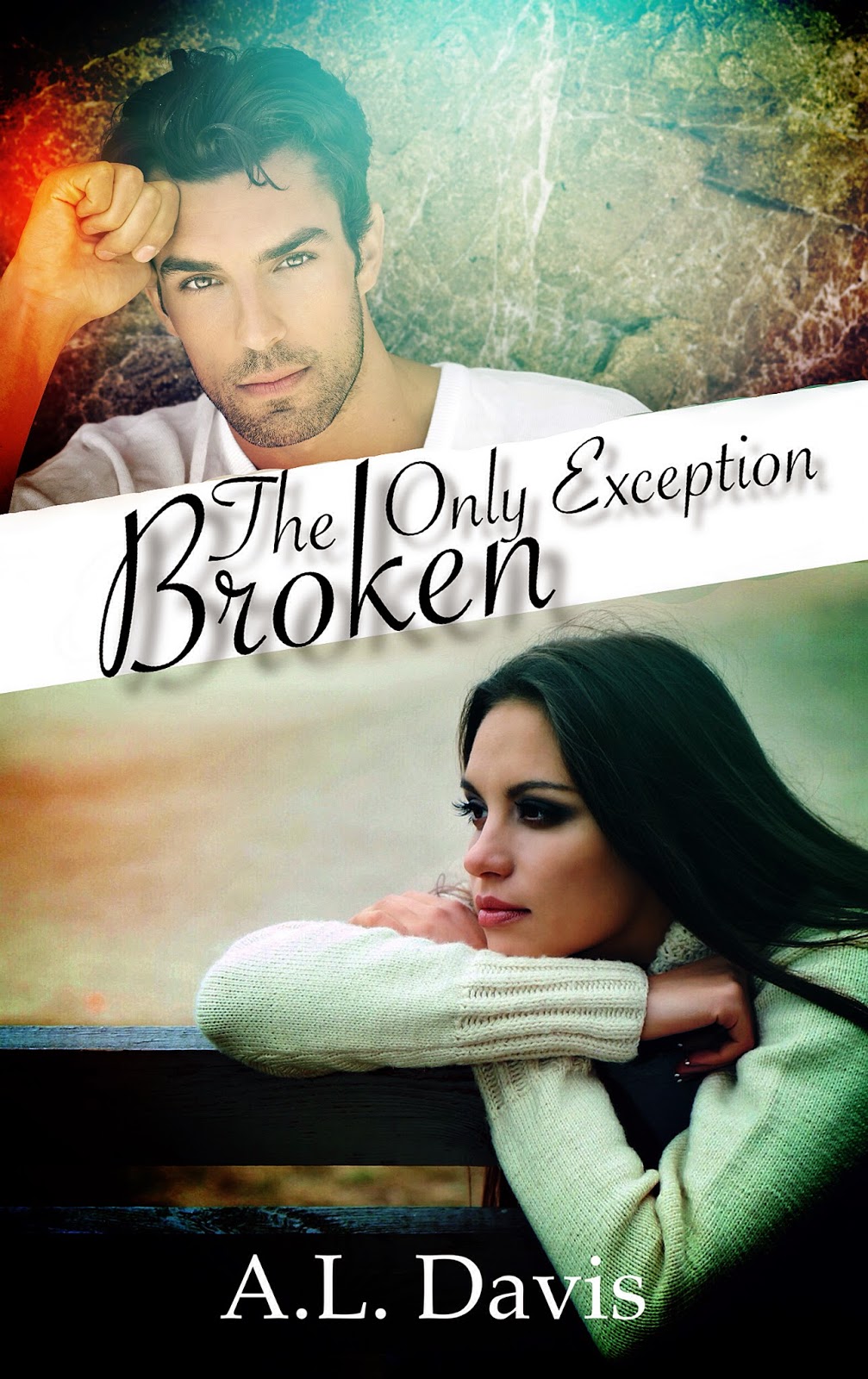 “Everyone I’ve ever loved has been taken from me and I can’t take the heartache anymore. It’s time to build that wall around my heart and let no one in, no exceptions.”
Ellie never did know her mother; before she turned twenty she lost her father in the line of duty; a freak accident stole her fiancé from her before they had a chance to start their life together. She wants answers, but now that she’s living in a new town and trying to start over, she’s finding that it’s not that easy. Maybe new surroundings are what she needs to make it easier to move on and forget all about her old life. It could have been…until he showed up.
“Having the sort of job that is as dangerous as what I do doesn’t allow for a personal life, no exceptions.”
Jack and his team of military misfits have seen their fair share of war zones and violent criminals. Skilled in precision rescue operations, they’ve traveled into some of the most terrifying countries and stood up to intimidating adversaries, but when a mentor of Jack’s calls them in for a favor that he is unable to turn down, he finds himself up against his most challenging fear of all…his heart. There is a fine line between getting close enough to do your job and getting so close that you get attached. That line used to be obvious, but now that he’s met her, things have blurred and priorities have shifted. Can he keep his feelings in check and still protect Ellie from an adversary more dangerous and twisted than she could ever imagine? 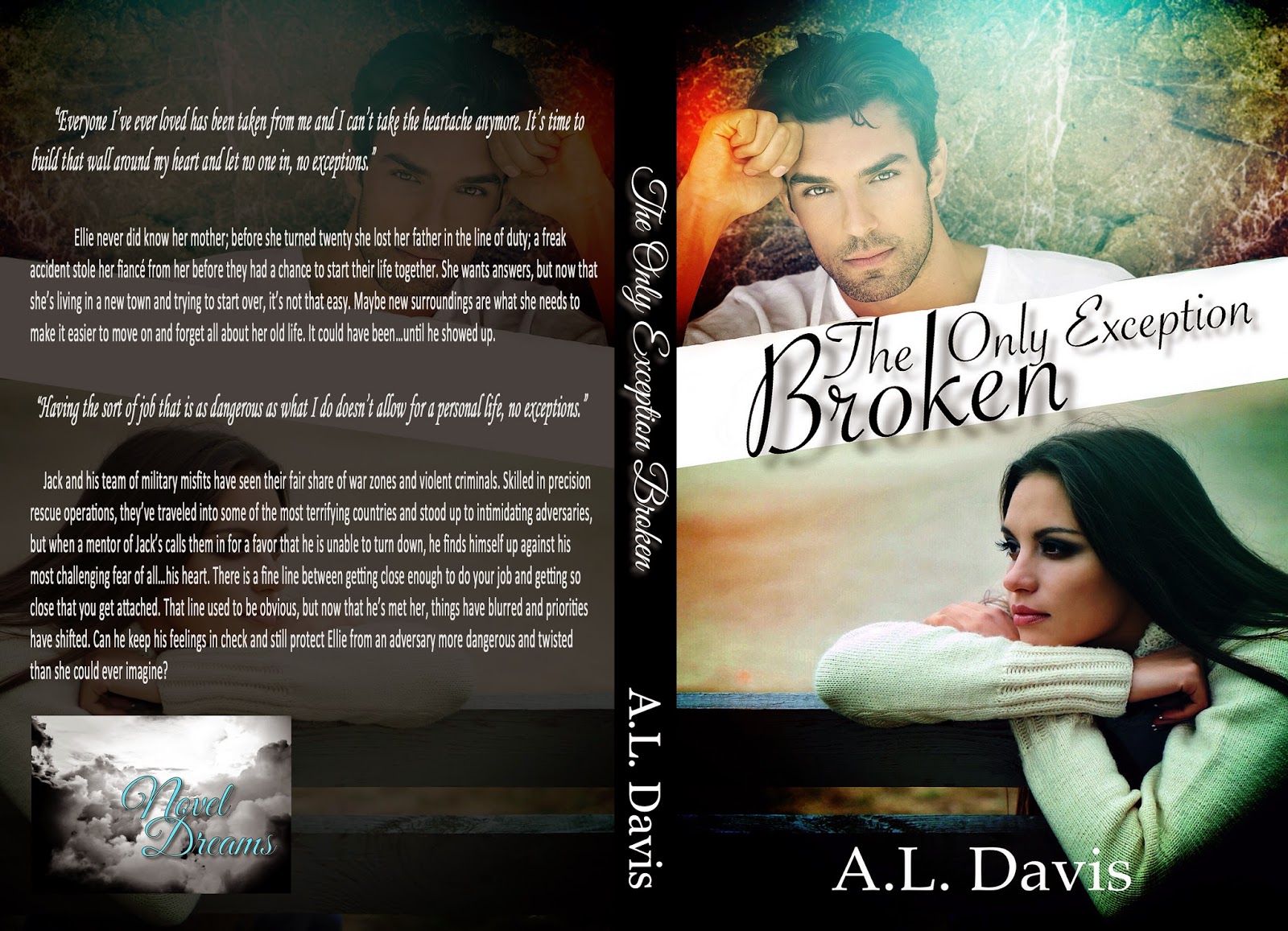 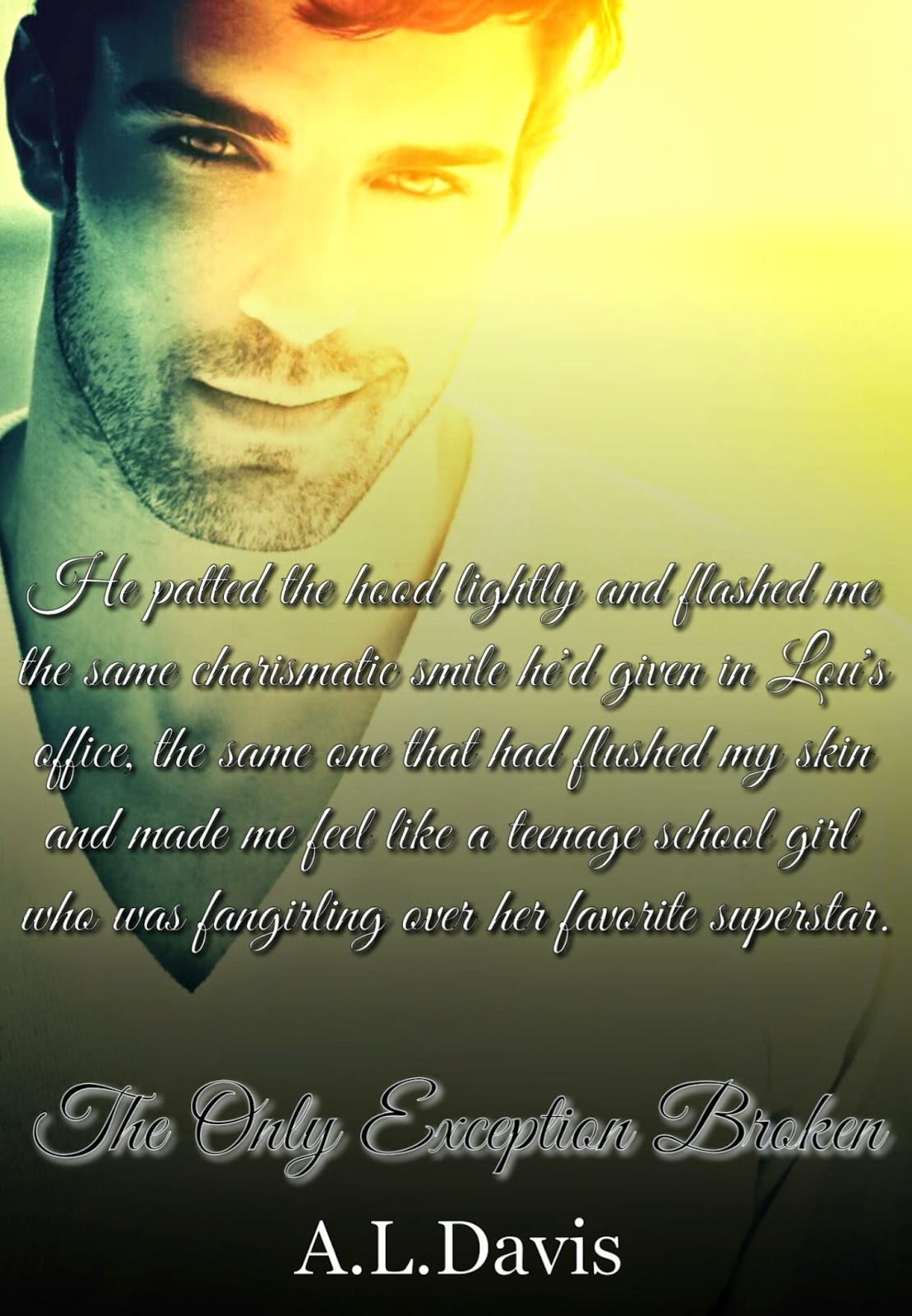 “And this…” I tossed the manila envelope back to the desk, “…is not a job. It’s a death sentence. My death sentence. I’m walking in blind. I mean, how do I know she’s not running from the law?”
Lou shook his head, his mouth contorting into a tight frown, and answered matter-of-factly, “She’s not. And why would that stop you?”
“How do I know for sure? How do you know for sure?” I challenged, making him smile.
Somehow, that irritated me even more. He was hiding something.
“Because I know,” he answered, lips pursed, eyes narrowing at me. He didn’t look away and neither did I. I wanted to know what he was thinking. What was he hiding? Unfortunately, he was going to make it difficult to find out.
I sighed, knowing that was the only answer I was going to get. “Is she hiding from her husband or boyfriend or something?”
“Most definitely not,” he answered with a heavy sigh, sadness flicking across his face.
This piqued my interest. And why was a small part of me so damn happy with that answer?
“Did she kill someone?” I figured I already knew the answer to this one, but I had to ask.
He chuckled. “Absolutely not.”
“What if she’s got the mob after her? Did she piss off a terrorist group?”
“So what if they are? So what if she did? You’ve been wrapped up in worse and handled it,” he answered quickly. “Stop with the stalling already, Jack. I need to know. Are. You. In.”
“Lou, I don’t help people against their will because if they won’t listen and do what I tell them to do, bad things happen. She doesn’t want me anywhere near her. She won’t even look at me, let alone talk to me. Ellie dodges me all day long. I tried to just talk to her like you asked me, but she avoids me like the plague and scurries off in the other direction. She looks at me like…like…”
“Like the frightened child she is,” Lou interrupted sighing. 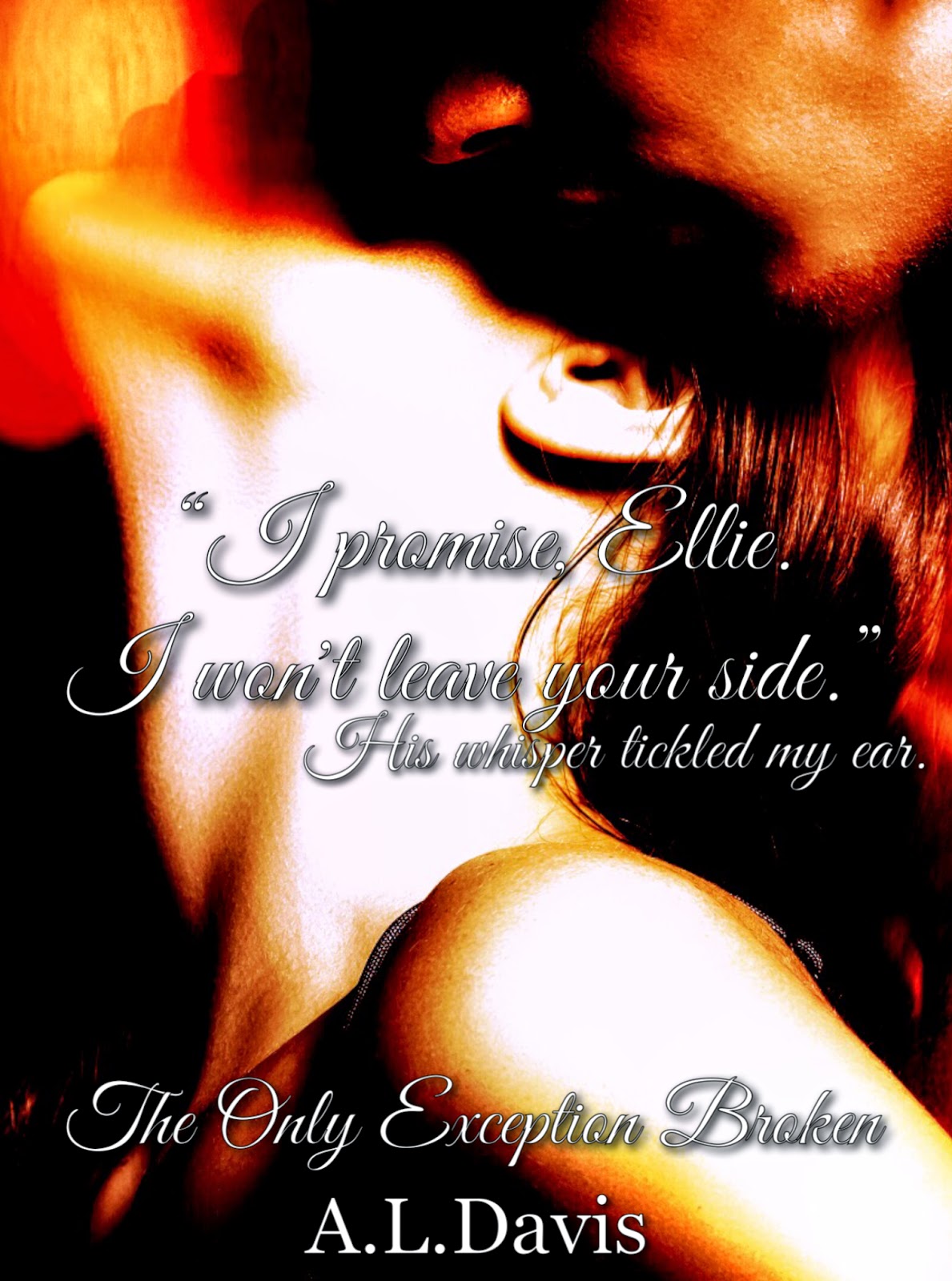 A.L. Davis lives in Southern California with her husband, two kids, and one fur baby. A.L. has had a passion for writing since high school where any free time was spent thinking up new stories. Shortly after graduating high school writing took a back seat to start a family. Now that the kids are older, writing has become her hobby once again.

Giveaway is US ONLY except the ebooks

Two Signed Paperbacks of The Only Exception: Broken

Two Ebook copies of The Only Exception: Broken 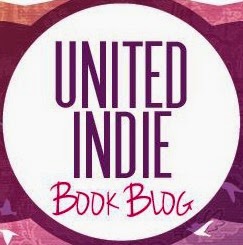