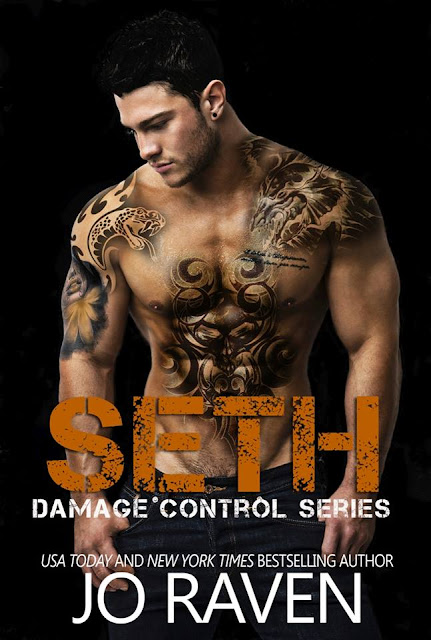 Life is a bitch. Keeps screwing me over, and I take blow after blow, sucking it up, giving her the finger.
Don’t get me wrong: I love women. Especially one woman – Madeline. She’s gorgeous, she’s sexy, she’s goddamn perfect.
Plus – minor detail – she has a boyfriend already.
Not that she’d want anything to do with the likes of me. Apprentice tattoo artist, former homeless person, covered in ink, without a penny to my name.
And sort of cursed. I mean, I’d be lucky to run into a girl, any girl, on my way in and out of hospitals with the way life has been knocking me about lately.
But I’m not lucky. Never was. Doesn’t look like that’s gonna change any day soon, either.
Until the day the girl of my dreams literally runs into me. With her car.
Life hates me, and if this isn’t a clue, then I don’t know what is.
Standalone novel. No cliffhanger.
*Warning: this book contains graphic language, sex, and violence. Mature readers only. Not intended for young readers.*
SETH is book 3 in the series Damage Control – a series set in the same world as Inked Brotherhood. The boys of Damage Control were taken in by Zane Madden and Rafe Vestri and offered apprenticeship and work in the tattoo shop Damage Control.
Next in the Damage Control series: SHANE(Damage Control 4).

The moment he’s out of the room, I bury my face in my hands. Stupid to feel so down because Fred wouldn’t kiss me, but it has been a sucky week. I’ve a right to feel low, right? I feel… confused. Sad.
Torn.
I don’t want to leave. Hard to deny my heart beats faster every time I’m near Seth.
Why do I like how strong he is, so much stronger than Fred? I shouldn’t be comparing them. Shouldn’t be thinking that Fred’s shoulders suddenly seem too narrow, his jaw too slender, that he seems too soft compared to the toughness radiating off Seth.
I shouldn’t wonder how Seth kisses, if sweet and slow, or hard and demanding. If he’d have kissed me, pushed me against the wall and held me there, pressed his body to mine if he’d been the one with me at the party.
Doesn’t matter. He wasn’t.
He’s not the one I want. I’m not picturing him in the shower, naked and—
No, I’m not.
Clenching my hands, I get up. I want Fred. I like the fact he’s slender and sweet, that I’m not afraid of him overpowering me, taking me against my will. That he’s so sensitive and careful. The confusion will clear when I’m out of here, far from Seth.
Can’t see my purse. I turn in a circle and spot it on the floor under the low table. I squat down to grab it and notice a crumbled piece of paper. I lift it, straighten it out on the table for Seth to find later.
It’s a photo, and the sight of it stops me as I prepare to stand up and go. The ink has faded to brown and yellow. It’s old and spent a long time folded, the creases so deep they’re about to tear open.
It’s the photo of two women and two boys. The women look like sisters, light-skinned and fair, and the boys look like brothers—dark hair and dark, exotic eyes. I’m pretty sure I know who they are. I smooth my fingertip over a small, smiling face, over familiar broad cheekbones and thick-lashed eyes.
A mother he’d thought dead for—how long? I wonder. How long was she missing? And what happened to him while she was gone? It’s hard to smooth out the wrinkles in the paper. The anger that made him crumble up something he’d obviously kept for a long time, a kind of talisman, a memory, makes my eyes sting.
Before I know it, I’m on my feet and looking for him. Can’t hear the shower running yet. I step into a tiny hallway. The bathroom door is open and I halt before he sees me, my breath hitching.
Whoa.
He’s standing at the sink, a hand on his chest between his hard pecs, head bowed, dark hair hiding his eyes. But God, his back… Broad and muscular, covered in intricate ink—snakes, feathers, ladders, claws, demons—and matching ink on his chest, reflected in the mirror, spreading down his pecs, stretching over his padded shoulders.
A snake, mouth open, fangs dripping. I know this tattoo. It’s the photo I saw hanging inside Damage Control.
He’s so frigging hot my body ignites, my blood burns, thumping heavily in the base of my throat, deep inside my belly, between my legs.
Jesus. This can’t be happening. I should go.
He lifts his head and our gazes meet in the mirror. I’m caught, unable to move, helplessly looking on as his eyes darken to black. His hand, still pressed against his chest, curls into a tight fist. His mouth is beautiful, wide and full, his jaw dark with stubble. I want to touch it, run my fingers against it, let it scrape my skin.
He turns around before I run and this close up, with his chest bared, his ink revealed, I’m rapidly forgetting my reasons for needing to go. His beauty hits me full-force—extraordinary, fierce, striking.
Crap, crap, crap. 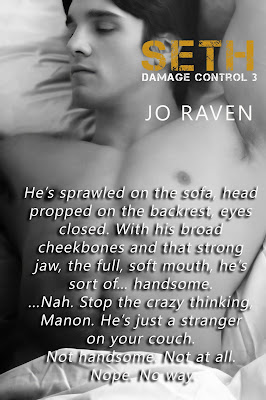 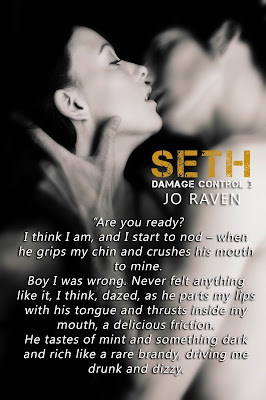 Jo Raven is a New York Times and USA Today bestselling author, best known for her series Inked Brotherhood and Damage Control. She writes edgy, contemporary New Adult romance with sexy bad boys and strong-willed heroines. She writes about MME fighters and tattoo artists, dark pasts that bleed
into the present, loyalty and raw emotion. Add to that breathtaking suspense, super-hot sex scenes and a happy ending, and you have a Jo Raven® story.

Find all my books here .
Be the first to get your hands on Jo Raven’s new releases & offers, giveaways, previews, and more by signing up here
Meet Jo Raven online – on Facebook
chat with her on Twitter (@AuthorJoRaven)
join her readers group  for sneak previews of her covers and stories

Be My Book Boyfriend & My Guilty Obsession