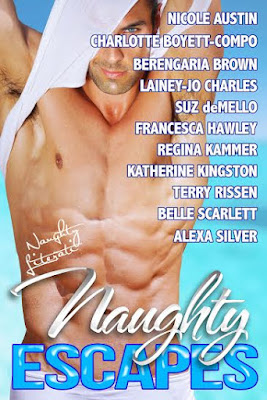 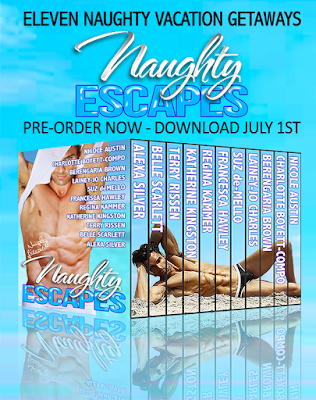 What
reviewers are saying:
“Sexy, steamy, sweet and positively sizzling!
Another fabulous box set from the Naughty Literati.
It’s like opening a gift box of gourmet chocolates. You don’t know what you’re
going to get, but you know it’s going to be utterly delicious!”  5 STARS
~cjsdragon’s
“Another hot and tasty entry. You’ll find everything
from flings to HEAs in various levels of heat and intensity. Well worth the
time, especially at the remarkable pricing.”
~  L. S. Tucker
“Come have a Naughty Escape, one story at a time” 5
STARS
~ Redrabbitt
HYBRID
MATES: SEX ME UP by Nicole Austin
One night at a Paris sex club—no-strings,
complications or inhibitions—just lots of fantasy sex. But in the morning I
forgot the most important rule. Never run from a feline predator—they live for
the chase.
THE
WYNDMASTER’S ESCAPE by Charlotte
Boyett-Compo
A love as old as time can sometimes lead to a future
one warrior never wanted.
FIREWORKS AT
THE LAKE by Berengaria Brown
Andrew didn’t want to spend the Fourth of July long
weekend with the people from the office so he goes to Lake Superior instead.
There he sees Luke, a blond Viking who arouses every craving for love and lust
inside him. But can he overcome his low self-esteem from when Rory rejected his
love and open his heart to another man?
PUNTING ON
THE RIVER CAM by Lainey-Jo Charles
Having escaped being roped into wedding party
activities, two American strangers turn a day of sightseeing in Cambridge,
England into a series of passionate encounters.
ONE HOT
HAVANA NIGHT by Suz deMello
Havana, 1958… On the eve of the revolution, journalist
Ellie Wheeler dreams of the biggest story of her life. Two hot men make all her
dreams come true—even ones she didn’t know she had.
SHAKE IT UP! By Francesca Hawley
After a mild quake in San Francisco, Allyson Rayburn
gets stuck in the same elevator as Ross Morgan, the Dom who’d been at the other
end of a flogger at a private club the night before. Her day just got
interesting.
WINDOW
DISPLAY by Regina Kammer
The apartment in Zurich was supposed to be the perfect
disruption-free place to finish my dissertation. Trouble is, my room came with
a very distracting view.
THE LAKE BY
MOONLIGHT by Katherine Kingston
Julie Forrester returns to Lake Como in Italy to
evaluate some paintings for a former professor–and to re-evaluate her
relationship with the man.
MOON DANCE by Terry Rissen
Christina and Will’s honeymoon in Berlin turns
potentially deadly as dark forces seek retribution for Will’s past life
actions. Can Christina save her beloved?
THE BERMUDA
LOVE TRIANGLE by Belle Scarlett
Castaway in the Bermuda Triangle, Trista finds herself
torn between two sexy shifters. Neither will share her so she must choose
between them. Decisions, decisions…
GET AWAY by Alexa Silver
A-list actor Bryson runs into a gorgeous—and very
naked—man on a Barcelona beach. Kell looks familiar but Bry can’t quite place
him. After a sexually-charged meeting, they go their separate ways, or so Bry
thinks. Fate comes knocking with an invitation to a party, and a date with
destiny.
Other Books
by THE NAUGHTY LITERATI
Naughty List: Thirteen Naughty Holiday Stories: 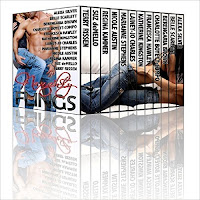