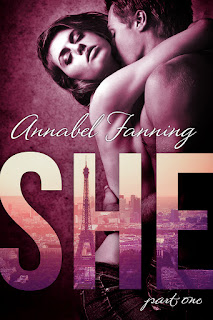 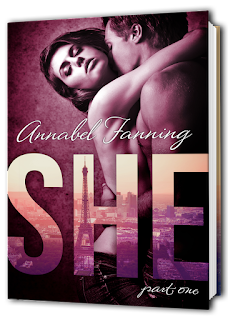 LOVE
and SEX at once, is a powerful combination.
Escape
into Annabel Fanning’s feel-good bestselling erotic debut. She Part 1 is a
contemporary and humorous look into the lives of two people who are on the
precipice of true love. The novel uniquely crosses several genres, mixing
first-grade erotica seamlessly with women’s lit and breath-taking romance.
The
story unfolds over sixteen thrilling and erotically charged days, during which
the reader is thrust into the heart of Paris, the novels backdrop, and into the
daily lives of the construction world’s elite.
Logan
Leary is a reformed bad-boy who moved to the city of love fifteen years
ago to start his life over. Now he owns one of Paris’s most successful
companies and leads as seemingly charmed life. There’s just one thing missing:
Gemima Samuels.
Gemima
Samuels moved to Paris with her down-on-his-luck boyfriend eight years
ago. She coasted through life (in that annoying way we sometimes do) until her
boyfriend cheated on her and life dealt her a wake up call. Choosing to start
afresh, Gemima ends her relationship and quits her job before being hired by
the most prestigious interior design firm in the city.
A
supposedly inconsequential lunch date turns out to be the start of something
phenomenal that will change both of their lives forever.
“Everything
about Logan is new to me. Everything. He is the difference between watching
television in black and white, verses watching it in colour: he adds dynamic
and depth and stimulation when my life used to be so dull.”
Logan
has loved Gemima for years.
Gemima
doesn’t know.
After
her deadpan relationship implodes, Logan seizes his chance to rock her
world.
Set in
picturesque Paris, SHE is an erotic tale about falling madly in love. Combining
sex, passion, and romance, these two high-flying professionals will leave you
saying, “Oh, la la!”
For
readers 18+ over only. Contains very explicit sexual content, and romance that
may cause heart flutterings. 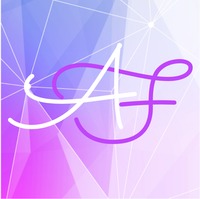 Annabel Fanning began writing songs as a child, the most memorable of which was
entitled: “Tropical Night in Switzerland”. Throughout her teens,
songwriting was the most rebellious form of expression that she was willing to
partake in (no tattoos, drugs, or biker boys), and her love for storytelling
developed. There was just one problem: music wasn’t her passion. A month before
her 20th birthday whilst sitting under the Californian sun a few deck chairs
down from Robert Pattinson, inspiration struck, and Annabel began writing her
first novel. The years passed and now at 26, Annabel has written a handful of
novels, which she plans on releasing throughout 2015/16. 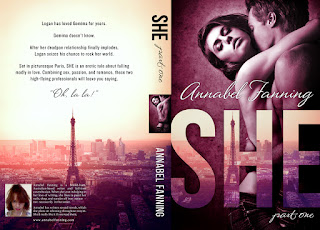