The Devil in Me
by KI Lynn 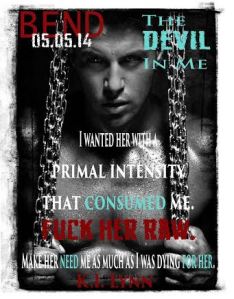 In search of strength and guidance at a nearby church, Jared happens upon a temptation. One he cannot hope to resist. Each time he sees her, the overwhelming urge to have her consumes him. The lust is overpowering, dragging him deeper and deeper with each encounter, exposing the devil within. 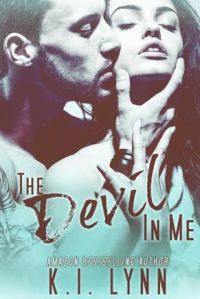 The Devil in Me Excerpt

The nerves on my neck lit up, tingling down my side. It woke me from my trance, and I turned to find innocent eyes looking at me from one row up on the other side of the aisle. When our gazes connected, she didn’t flinch, her eyes didn’t widen, but a slight blush did appear on her cheeks.
The strange current continued to move through me.
I was caught, roped in, staring at her.
She seemed young—early twenties maybe. I went from studying Jesus to studying the woman who called to me. That was the only way I could explain the firing off of every nerve ending in my body.
She had large, blue doe eyes that bored into my soul. Dark brown, wavy hair curled around her smooth, pale skin and full cheeks. She nabbed her full bottom lip with her teeth before looking away, hiding from me.
It didn’t stop me from staring at her. I tilted my head to the side, forehead scrunched as I tried to figure out what the hell had just happened—and why my cock was so hard. It was just a look, but at the same time, it felt like so much more. A connection, and not that love-at-first-sight bullshit.
Base level between a man and a woman—a need that populated the earth.
Our strange interaction caused images of fucking her on the altar to course through my mind. Was she as untouched as her innocent face suggested? She looked soft, inviting, and corruptible. How would her full hips feel beneath my hands as I thrust my cock into her?
I turned back to the front and began to ask for forgiveness for the things I was thinking about doing to her. My dick, however, continued to dream. A small groan slipped from my lips, and her head snapped up. I cupped my cock through my jeans, adjusting it so it didn’t press so hard against the seam. It twitched against my palm as she squirmed in her seat.
Fuck.
I sat still, staring at her profile. Her lips parted, skin pink, and she moved her ass again. I blew out a breath to calm myself. It was ridiculous. I was just horny because I hadn’t had sex since Monica gave me a break-up fuck three months prior.
After a few minutes, she stood and headed to the confessional. I couldn’t help but turn to look at her delectable ass as she walked. Soft curves called to me, begging me to touch them, own them.
As soon as she stepped out of sight, I ran down the steps to the restroom and locked myself in. I splashed some water on my face, staring at the image in front of me. Someone else stared back. My brown eyes were almost black, lids heavy with a force of lust I’d never experienced.
My teeth clenched, muscles coiled tight as my hips rocked, searching for her. I grabbed hold of the sink, my breath heavy and hard.
What is wrong with me?
It was overpowering. An internal battle for control waged as consuming need pumped through my veins. I popped open my jeans and pulled my cock out. It didn’t matter that I stood in the bathroom of a church—I had to get off before I went insane.

The Devil in Me Soundtrack

Paige Matthews has a lot to learn, and more than just about being an intern with the F.B.I. Inexperience with all types of relationships leaves her looking for a new place to live. Eli Chambers and his partner, Cain Maddox, are looking for a roommate. It’s the perfect arrangement, but one that will change all their lives forever.

He interrupted, pulling me closer to him on the bed. “Baby,” he said softly. “It’s because I see that chemistry going back and forth between you and Maddox…and, I guess I’m just not sure if there’s enough of that same chemistry—in you—left over for me. Because I know that there’s plenty in me left for you—if you want it, I mean.”
And I think he might’ve just blushed right then, like a guy that was wearing his heart on his sleeve—just putting it right out there and so worried that it might not be enough.
But it was enough.
It was more than enough.
“Oh Eli,” I sighed, “I can’t believe you’ve told me all of this, but I am so fucking glad that you have.”
Our eyes met and locked. In that moment, everything that Cain Maddox had assured me of since we’d given in to our feelings was coming true.
I leaned over and brushed my lips softly against his, waiting for him to snake his arms around me and pull me against to him.
I didn’t wait long until that was exactly what he did.
We kissed and it was unfamiliar, but it was sweet. And every second, it became sweeter. I felt myself warm to his touch; my belly tingled with anticipation of where he might touch me next and I wanted him to touch me in different places.
He turned and pulled me into his lap, his fingers tilted my chin back so that his eyes could study mine and I saw the warmth fill them.
“God, baby. We’re going to do this.”
He lifted me up into his strong arms, carried me to their room, and gently deposited me on their bed. The same bed that I had shared with Cain, I was now going to share with Eli and I wanted it. I wanted it more than I thought I ever could.
“Get undressed,” he ordered, “We’ll do the sensual shit another time, but for right this second, I need to be inside of you and claim you as mine, too.”
God, his words made me wet and yeah, that surprised the hell out of me as well. I scrambled to do as he ordered, shedding my clothes quickly; leaving my thong on so that he would be the one to relieve me of it when it was time…
He was standing there naked and he was every bit as beautiful as Cain. His body was well-muscled and his belly flat. He had a lighter complexion than Cain, but God he was beautiful in a “golden-boy” sort of way. I felt myself getting wet just in anticipation of what would happen next.
He opened the bedside table drawer, and pulled out a handful of condoms.
Holy shit.
He pushed me back against the pillows on the bed, his eyes taking in all of my nakedness with a hunger. He straddled me with his strong, muscular thighs, leaning forward to capture my lips with his.
I laced my arms around his strong neck, pulling him in closer. I felt his fingertips lightly caressing my breasts, slowly and methodically tugging at my nipples until they grew hard for him. He moved his mouth to one, his tongue circling the soft peaks, and his fingers gently kneading my breast so that he could begin suckling.
I drew in a sharp breath as he took the nipple into his mouth and sucked hard on it, my pussy now fairly soaked in anticipation. I needed him inside of me every bit as much as he wanted to be there.

I Want Your Sex
George Michaels

Waiting On The World to Change
John Mayer

Something to Talk About
Bonnie Raitt

All Through The Night
Cyndi Lauper

I’ll Stand By You
Pretenders 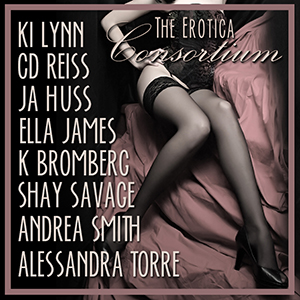 The Erotica Consortium was the brain child of CD Reiss. In December 2013 she asked JA Huss to help her pull together the hottest erotica writers to start a private Facebook group that would encourage support in all areas of bookish things. Members of The Erotica Consortium were personally invited by JA and CD and the group is complete with six additional authors: Shay Savage, Andrea Smith, KI Lynn, K Bromberg, Ella James, and Alessandra Torre. BEND is their first anthology together.

This set will only be available for a limited time, so get it before it disappears.