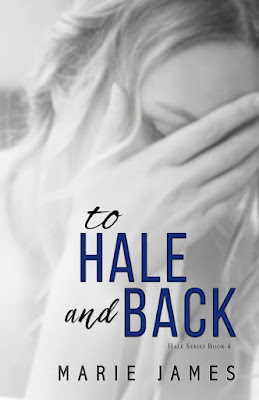 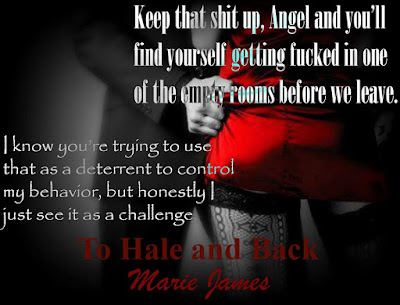 While this closely knit group of six tries to settle into normal; drugs, money, and vengeance leave one man dead and another in jail for a wide range of crimes he did not commit.

Friendships and bonds are tested past the breaking point, allegiances are questioned, and relationships threaten to crumble.  From the point of view of all six characters we’ve come to love, perspective is offered on the hell that they are all experiencing, the love they’ve all found, and the sexy, fairytale lives they all wish to get back to.
This is the final book in the Hale Series.

Recommended for readers 18 and up due to strong language and explicit sexual content. 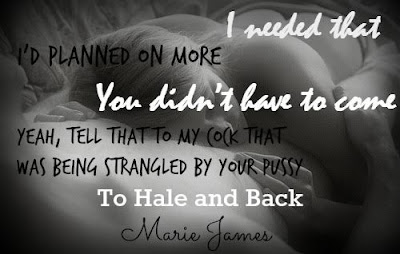 I shake my head clear of those thoughts as I pull into and park in the subterranean garage. I all but jump out of the SUV and sprint to the elevator bank, in a mad rush to get to my penthouse. I’m chastising myself for not grabbing a bottle of wine or a late lunch for us as I unlock the door to the large apartment.

I empty my pockets into the basket on the front entry table. I smile to myself because I know Alexa hates the damn thing. I may actually move it this weekend. Anything to make her happy. I frown as I step further into the apartment and see that the living room and kitchen are empty. I should’ve called her first before just assuming she wouldn’t find something to do, knowing I’d be at work again until late.
I kick off my shoes and scoop them up as I make my way to the bedroom. The door is shut which is odd, but I don’t falter in my steps until I hear a man’s voice, “Fuck, just like that! Suck it deep.”
My hand hesitates on the doorknob, because I know when I swing it open my life is going to change. I teeter on the edge of indecision; my broken heart throbbing painfully in my chest. “I’m close, bitch.” I hear the masculine voice say.
Two things happen at the moment. I’m suddenly angry that Alexa is doing this to me when she thinks I’m at work, but alternately I’m pissed at this man for talking to my woman like that.
Hatred over the cheating wins out and I swing the door wide. My shoes tumble from my hands just as “What the fuck, Alexa,” boils out of my mouth.
She squeaks loudly and tries to pull the sheets over her but it’s too late. She’s already been caught.

Marie James, full-time working mother of two boys and wife of 11 years. I’ve spent almost my entire lifetime living in central Texas, with only short stays in South Carolina, Alabama, and Florida. I’ve always wanted to write novels and just recently had the gumption to sit down and start one. My passions include reading everything under the sun and sewing. I even listen to audio books while sewing. To Hale and Back is the final book in the Hale Series.

I have several other story lines worked out for other books once this series is complete. Reading and writing is my happy place.